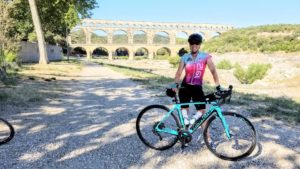 Le Loop cycles 21 stages of the Tour de France one week ahead of the pros. The ride, which is fully supported, requires riders to hit fundraising targets for the William Wates Memorial Trust, a charity which supports disadvantaged youth. Team Atomica athlete Carmen Wageman trained hard all winter and spring to tackle this life-changing event. She sat down with her coach Tara Norton to reflect on the experience.

What made you want to take this on?

I love endurance sports and training for them, and would like to say that I signed up for this because it’s considered one of the hardest endurance cycling challenges there is. However, there was a more personal reason for my signing up, one that is a little difficult to share: I wanted to change my brain.

There is a part of my personality that sometimes, when things get tough, I quit before I believe I will might fail. I wanted to figure out why I do that and change that part of myself, if it was at all possible. A year ago, I tried to climb Mt. Ventoux in France while on vacation with my husband. I struggled all the way up and then I panicked near the top, convincing myself that I just couldn’t do it, so I walked the last steep 300 meters. Deep down inside, I knew I was just quitting because I feared if I really, really tried I’d fail anyways, and I didn’t want face that. So, I quit.

This bothered me for months. When I heard about the Le Loop Tour event, I signed up with the mindset that I wouldn’t quit, no matter what. I trained hard for seven months without missing one workout. For the first time ever, I gave my training everything I had. I wanted to know if, when I opened myself up to accepting pain, failure, and disappointment, and if I didn’t stop trying my absolute best, would it change me?

An average day on the Tour began with a very early start. Breakfast usually started at 6am and, when the doors opened, 100 hungry guys imitating locusts swarmed the tables, cutlery, dishes and, most importantly, the food. The small hotels in rural France were just not prepared for the feeding frenzy that happening each morning (it was survival of the fastest). I never went hungry, but the selection of food was determined by where I ended up standing in line.

After breakfast we were either on a bus heading to our stage start (which could be up to a four hour bus ride) or we were riding from our hotel – but not before we had to pack-up our suitcases from the night before and put them on the transfer bus which was heading to our next hotel.

Once on the road, there were four food stops which were also treated as check-in points. When you arrived, you had to cross your name off a list as a safety measure. The food supplied depended on the time of day. Food stop three was usually lunch and was always the best. My only concern was the lack of protein and greens I felt I received. Carbs and salt were the main focus, with a sprinkling of fruit. The food stops also transported a bag that you supplied and packed daily. These bags could have anything in them like extra food, warmer cycling clothes for the Alps stages, spare tires, chamois cream, etc., just like a transition bag in a triathlon.

All of the Stage rides were incredible. France is so beautiful, almost indescribably so. Deep purple lavender fields, mountains, and castles kept my mind off the seemingly endless climbing which was the better part of each day’s activities. 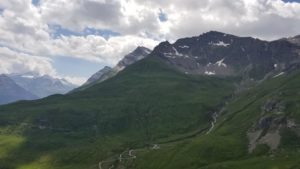 Dinner was almost always at the hotel and was usually at 8pm. The dinners were pre-prepared with no options (except if you were vegetarian or had have specific food requirements). I loved every meal – the French do take pride in presentation and taste.

At the end of dinner there was always a briefing for the next day which explained bus transfers, start times, and the stage route. Le Loop also offered a daily massage (10 mins for 10 euros). The queue was always long, so most often I chose sleep over waiting for a massage.

Sleep, or the lack of it, was an issue for everyone. Six hours seemed to be the max because late dinners, briefings and preparing for the next day often meant getting to bed after 11pm.

As an accomplished and busy business woman, how were you able to take a month out of your life to dedicate to this undertaking?

I have run my own business for almost 20 years, I am now able to take a longer vacations at certain times of the year. July is a slow month for my industry, so this event worked out well for me. In addition, my children are now in their 20s, so they’re self-sufficient, and my husband is a really good sport.

What was the most challenging part of the process?

There were so many… daily transfer to hotels, the packing and unpacking, the sharing of my room with total strangers, the daily cleaning and maintaining of my bike, the lack of sleep, fighting for food in the morning, nightly washing of my cycling gear in a sink, and the packing of my gear, wet, the next morning. If I happened to be riding alone, getting lost was a challenge. I would sometimes call my husband who would Google map me back onto the official Tour de France route. However, the most challenging of all was descending, which I still need to work at. A lot of the descending was technical and there was so much descending.

Were there moments you just wanted to pack it in and go home? How did you negotiate those?

The first few days were the hardest. There was a record-breaking heatwave in France and I was just not prepared mentally for how hard each stage was. I remember one morning around Stage 4 or 5, I woke up and I began sobbing uncontrollably. The volume of riding I had ahead of me just seemed to be impossible, and I felt exhausted and completely ill-equipped to finish. I felt trapped and very alone. It was a pretty dark time. I got through it by reaching out to my coaches, my friends and family. The messages of support poured in and it helped me refocus.

What was the most rewarding part of this journey and how has it changed you?

I was never really sure if I could do it. It was the hardest thing I’ve ever put myself through. The memory of riding around the Arc de Triomphe, the last kilometer of Stage 21, knowing that I had done every kilometer that Le Loop had put in front of me, still makes me cry a little when I think about it. 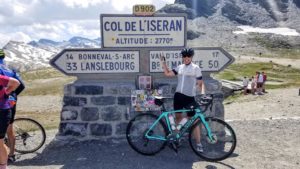 It has changed me because I learned how to talk to the voice in my head, the one that sneaks up and says “you can’t do this”. I now know how to shut her up.

What is one piece of advice for someone doing this event?

Train really hard. This event is very long, very demanding, and will take everything you got to get through it. It may also be the most rewarding thing you will ever do.

Next steps? How do you top that?!

I’d like to go back to France next summer and climb all three sides of Mt. Ventoux in one day. It is a pretty famous challenge and one that I feel I am mentally ready to do. It totals 70km in length and has a 4,400 meter ascent. It’s not an extreme event, as Le Loop most certainly was, but I think it will complete the circle for me on this important journey I undertook.